On Stage and Inclusive offers theater for all

GREENSBORO Kayla Usry’s face quivers ever so slightly with apprehension as she looks out onto the Starr Theatre audience. 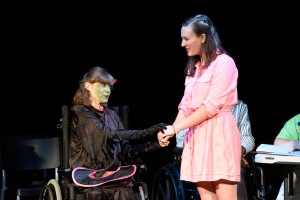 She looks up to see Maria Reginaldi’s smile of reassurance.

Usry takes a breath to calm her nerves, then begins to softly sing “For Good,” from the Broadway hit “Wicked”:

“It well may be

“That we may never meet again

“So, let me say before we part;

“So much of me

“Is made of what I learned from you.

Usry sang from a wheelchair.

At 22, she had just endured her 22nd surgery, this one to repair a dislocated hip.

She feared that it would keep her from singing in this Community Theatre of Greensboro production.

After all, CTG created this theater class for people with special needs.

For the fourth summer, CTG offered OnStage and Inclusive, a two-week program for people with physical, intellectual or developmental disabilities.

Usry lives in Jamestown with her mother, stepfather and four siblings. Until the latest surgery, she worked at Friends Homes West.

“There wasn’t any sport I could really do,” Usry said. “I thought, ‘I really want to try this.’ ”

CTG paired them with volunteers — many of them CTG actors — to work on self-expression and communication skills through theater.

The two weeks culminated with a showcase of songs, dance, skits and personal reflections that they all create together.

“You wouldn’t believe how many actors want to be a part of this,” said Mitchel Sommers, the executive director of CTG. “Most are young people who have grown up at CTG. They don’t talk about helping the person. They talk more about what they get out of it.”

Actors such as Maria Reginaldi.

Reginaldi played Dorothy in CTG’s 2011 production of “The Wizard of Oz.”

Now 19, she opted to spend two weeks of summer vacation from Liberty University volunteering with the program.

She and Usry bonded over their admiration for Broadway star Idina Menzel, who originated the role of Elphaba in “Wicked: The Untold Story of the Witches of Oz.”

They chose to sing “For Good” from the show, Usry as Elphaba and Reginaldi as Galinda, who becomes Glinda, the Good Witch of the South.

Usry worried about singing her part in a key lower than her regular singing voice. But Reginaldi encouraged her.

“Kayla is awesome,” Reginaldi said. “She is excited about being on stage, and that’s really fun to see. It’s encouraging to me as a performer.

“She has really good pitch and a really good tone,” Reginaldi said. “She definitely struggles, but she works through it.”

Born prematurely, Usry faced a host of health issues as a tot.

She was airlifted to Duke University Hospital with collapsed lungs. She didn’t come home from the hospital until she was 5 months old. Ensuing years brought lung, stomach and heart ailments.

She now has about 40 percent lung capacity because of repeated trauma to her lungs caused by infections in her early years and long stretches on a ventilator.

She and her family have faced loss. In 2006, her father, John, died of brain cancer.

Yet Kayla has long loved to sing.

Beth Usry remembers her daughter at age 3 in the hospital, “all these wires and tubing coming out of her, singing ‘The Sun Will Come Out Tomorrow’” from the Broadway show “Annie.”

“She sings from the time she wakes up, when she’s in the shower, until the time she goes to bed,” said her stepfather, Jim McSorley.

“With all the adversities in her life,” Beth Usry added, “that is the one thing that has kept her positive.”

OnStage and Inclusive started as OnStage and InFocus, a partnership between CTG and a local advocacy program called InFocus.

CTG long has welcomed people with special needs into its productions. With OnStage and InFocus, the two organizations united to take their message of inclusiveness to a wider audience, program director Wendy Wood said.

InFocus trained CTG over three years to be self-sufficient with the program. But CTG still involves students from UNC-Greensboro’s community and therapeutic recreation department, disability advocates and American Sign Language interpreters. This year, it added the expertise of Alison Brubaker and Billie Jones of the Arc of Greensboro.

This year’s program attracted 34 people, ages 12 to 65-plus, nearly half with special needs. The cost is $150, but it’s free for the volunteers.

Some have performed with CTG or elsewhere before.

They audition to participate but don’t need theater experience, Wood said. They might share a talent, recite a poem, read, even sing “Happy Birthday.”

“Before I got involved in this, I would ask, ‘Is she autistic? Does he have Down syndrome?’” Sommers said. “It doesn’t really work because they are everywhere on the spectrum.”

Conversation isn’t easy for Rachel Gains, 30, who has autism.

Yet she wows audiences with her operatic voice.

“She sings opera in 10 languages,” said her father, Larry. “She hears a melody one time, she has that melody with perfect pitch forever.”

Gabriel Allen acts from his wheelchair. He has cerebral palsy.

He points out another young man.

“He’s in a world of his own,” Sommers said. “But he knows the lyrics to every Broadway tune you can think of.”

Acting specialists Cindy Bower and Daniel Morrison start with theater games. They split into groups to create a commercial for a fictitious product.

Some, like the gum that can change flavor, become part of their final performance.

“They are exceptionally good at improv,” Sommers said. “They are much more uninhibited.”

Groups create their own characters and skits.

When they learned of Cameron Kidd’s interest in the weather, they cast him as a weatherman.

Beth Usry is impressed with what Kayla says about the program.

“She was equal to everyone else, not this poor pitiful person who needs a break,” Beth Usry said.

Kayla Usry already plans to return next year — and not in a wheelchair.

Sommers has scripted their songs, skits, dance numbers and reflections — comic and serious — into a variety showcase, modeled after the talk show “The View.”

The company opens with the song and dance number “Anything Goes.” Those who don’t tap dance clap along.

“The world has got ALS

“There’s guys in a dress

“But more or less,

Audience reactions run from laughter to tears to thunderous applause and cheers and back again.

Reginaldi wheels Usry onto the stage. Usry wears a witch’s outfit; her face is painted green.

“That people come into our lives

“Bringing something we must learn.

“And we are led to those

“Who help us most to grow if we let them.

“And we help them in return.”

Usry starts out softly. Her voice grows in volume and confidence.

“Who can say if I’ve been changed for the better

“But because I knew you …

Reginaldi: ”Because I knew you …”

Their smiles and voices blend in harmony:

“Because I knew you

“I have been changed for good.”