One rising star from Greensboro made his debut on Broadway as Daniel in the musical Once On This Island, from the Tony Award®-winning writers of Anastasia and Ragtime, on Dec. 3 at the Circle in the Square Theatre in New York City. According to ibdb.com (the internet broadway database), Once On This Island was based on the novel “My Love My Love” by Rosa Guy; was written by Lynn Ahrens with music by Stephen Flaherty.

Powell, 22, was born in Greensboro and went to school at Weaver Academy and then onto the University of North Carolina School of the Arts. He graduated UNCSA in May and right out of college he was asked to portray Danie in Once On This Island on Broadway. He packed up and moved to the Big Apple in August.

“I had a series of auditions back this summer that led to it, and I got offered the role in July,” he said. “I spent five years at the University of North Carolina School of the Arts, and the culmination of our training there, we do an industry showcase in Los Angeles and New York City where we invite all of the top agents and casting directors and directors to sort of watch us do scenes and songs in hopes of securing talent representations and jobs in New York [City] and Los Angeles. Out of that opportunity, I was scouted by talent agents and some cas 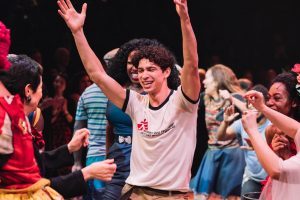 ting directors who were looking at me through some different roles and this one sort of came out of that.”

According to its website, Once On This Island is “bursting with Caribbean colors, rhythms and dance. This production transforms the reality of a tropical village devastated by a storm into a fantastical world alive with hope.”

The musical has already gotten its fair share of raving reviews. Jesse Green of The New York Times wrote that the play was “ravishing” and was delighted to enter the world of Once On This Island. Deadline’s Jeremy Gerard called the musical “glorious and timely.”

Isaac Powell describes his character Daniel as “this really wealthy and privileged kid” who lives on a divided island. Where, he said, peasants who have dark skin live on one side with the light-skinned wealthy people on the other side behind a set of iron gates. Isaac Powell said that Ti Moune (Hailey Kilgore), a peasant girl sees Daniel (Powell) from afar one day and fantasizes about being with him. Isaac Powell said she then prays to the four gods that rule the island. 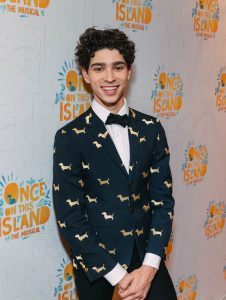 “They hear her prayer and decided amongst themselves because they are tricksters and they like to have a good time, that it would be really entertaining to see what happens if they grant her wish,” he said. “The gods control the elements: they control the Earth, they control the weather and water and the other one controls death. I don’t want to give too much away but, you sort of see what happens when two different worlds meet for the first time.”

Isaac Powell said Daniel is someone who grew up in a life of luxury and had everything handed to him, but Isaac Powell does not connect with his character on that. “I didn’t grow up super wealthy, or privileged, I have had to work hard for everything I have now,” he said.

In fact, Isaac Powell said he did not grow up in an artsy household and had a “sportsy family.”

His dad is a professional cross-fit athlete and bodybuilder; his brother was a wrestler, his sister was a soccer player.Even though Isaac Powell was involved in sports growing up, “it never really clicked” with him; he said it wasn’t his passion like it was for his family.

“Once I was there, I fell in love with the School of the Arts and decided to stay there for the remaining four years of my college education,” he said.

Terry Powell, Isaac’s mother, said her son “paved his own way” and she attributes that to his success. “All of his drive really came because of his passion for theatre and acting,” Terry Powell said. After hearing the news about her son getting a role on Broadway right out of college, she said,  “It was pretty surreal as a parent to see your kid excelling and being the best at what they are doing. I always felt that he would quickly rise to the top on Broadway, but I didn’t expect it to be that fast.”

Terry Powell said this was only Isaac’s third audition out of college and to land a role on Broadway is “almost unheard of,” she said. “I am not sure that the magnitude of it has set in yet, we have just been on cloud nine since the day he told us,” she said.

Terry Powell said that when she first moved to Greensboro, people were always telling her that it was a good place for the arts. “From the phenomenal community theatre to the support that the community gives to the arts, to having one of the top acting schools in the nation just 20 miles away, just afforded so many opportunities that he couldn’t have been able to get if we were still living elsewhere,” she said.

Powell’s advice to aspiring entertainers in Greensboro is to “work as hard as you can” and make sure to have the stamina, endurance and passion when seeking their dreams to fruition.

Katie Murawski is the editor of YES! Weekly. She is from Mooresville, North Carolina and graduated with a bachelor’s degree in journalism with a minor in film studies from Appalachian State University in 2017.