An event every week that begins at 7:00 pm on Monday, Tuesday and Wednesday, repeating until February 8, 2018 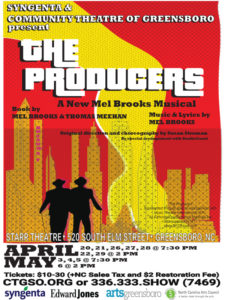 Please arrive to auditions at either of the dates mentioned as close to 7PM as possible. Please come with a prepared song—sheet music or karaoke CD (music only; no one singing on the CD).  Even if you are auditioning for a non-singing role, we would like for you to sing something; even “Happy Birthday”.  An accompanist will be provided and we will have a CD player on hand if needed.  No monologues necessary.  Those being considered for singing roles and non-singing roles will be asked to read from the script which will be given and assigned to you at the audition or callbacks.

A scheming producer and his mousy accountant aim to produce the biggest flop on Broadway in this Mel Brooks laugh-out-loud spectacle. The plot is simple: a down-on-his-luck Broadway producer and his mild-mannered accountant come up with a scheme to produce the most notorious flop in history, thereby bilking their backers (all “little old ladies”) out of millions of dollars. Only one thing goes awry: the show is a smash hit! The antics of Max Bialystock and Leo Bloom as they maneuver their way fecklessly through finding a show, hiring a director, raising the money and…well, you’ll have to buy a ticket to see how it ends!

At the core of the insanely funny adventure is a poignant emotional journey of two very different men who become friends. Winner of 12 Tony Awards, The Producers truly is a boffo hit!