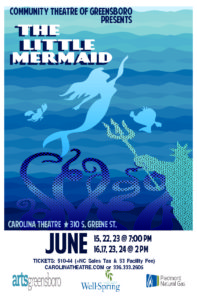 *MESSAGE FROM CTG* CTG is excited to mount their first blockbuster musical ( other than The Wizard of Oz ) on stage at the historic Carolina Theatre after several years’ absence. Full orchestra, glorious costumes, top notch scenery and lighting, and a magnificent cast hopefully featuring you!

CTG is looking for a large cast of approximately 75 actors, singers and dancers of all ages, types, abilities and ethnicities to round out this large ensemble production. Leading and supporting roles will be played by age appropriate adults and teens while young people will be part of the many musical numbers, dances and scenes in the show.

Please come to the audition with music in the right key for you and be prepared to sing approximately 1-2 minutes of your audition piece. Piano accompanist provided. DVD player on site if needed. There will be a movement combo to learn as well. No monologues necessary. Those who are called back to a subsequent audition will be asked to read from the script at that time.

Rehearsals will begin approximately May 1, 2017. Rehearsals will primarily be weeknights and/or weekends depending on needs of production and availability of actors/staff.

CTG will provide the best in technical elements, venue and staff but what will truly make the show a success will be the talent of the cast! Hope to see you at auditions.

Please arrive to auditions at either of the dates mentioned as close to 7PM as possible. Please come with a prepared song—sheet music or karaoke CD (music only; no one singing on the CD).  Even if you are auditioning for a non-singing role, we would like for you to sing something; even “Happy Birthday”.  An accompanist will be provided and we will have a CD player on hand if needed.  No monologues necessary.  Those being considered for singing roles and non-singing roles will be asked to read from the script which will be given and assigned to you at the audition or callbacks.