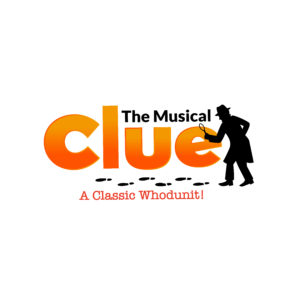 Please arrive to auditions at either of the dates mentioned.  Please come with a prepared song—sheet music or karaoke CD (music only; no one singing on the CD). Even if you are auditioning for a non-singing role, we would like for you to sing something; even “Happy Birthday”. An accompanist will be provided and we will have a CD player on hand if needed. No monologues necessary. There will also be a dance/movement portion of the audition.  Please plan to bring shoes and clothes to move in and learn a combination from the show’s choreographer. Those being considered for singing roles and non-singing roles will be asked to read from the script which will be given and assigned to you at the audition or callbacks.

Additional Info:
Clue: The Musical (March 8-17, 2018) Book by Peter DePietro, Music by Galen Blum, Wayne Barker & Vinnie Martucci, Lyrics by Tom Chiodo, Based on the Parker Brothers’ Board Game The internationally popular game is now a fun-filled musical that brings the world’s best-know suspects to life and invites the audience to help solve the mystery: who killed Mr. Boddy, in what room, and with what weapon. The audience receives forms to help them deduce the solution from clues given throughout the fun-filled evening. Three audience members choose from cards representing the potential murderers, weapons, and rooms; there are 216 possible solutions! Only one hard-nosed female detective is qualified to unravel the merry mayhem. Comic antics, witty lyrics, and a beguiling score carry the investigation from room to room. Even after the culprit confesses, a surprise twist delights the audience.