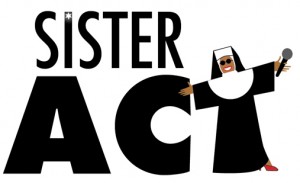 Information:                     Please arrive to auditions at either of the dates mentioned as close to 7PM as possible. Please come with a prepared song—sheet music or karaoke CD (music only; no one singing on the CD).  Even if you are auditioning for a non-singing role, we would like for you to sing something; even “Happy Birthday”.  An accompanist will be provided and we will have a CD player on hand if needed.  No monologues necessary.  Those being considered for singing roles and non-singing roles will be asked to read from the script which will be given and assigned to you at the audition or callbacks.

A woman hiding in a convent helps her fellow sisters find their voices as she rediscovers her own. This feel-good comedy smash is based on the hit film. Sister Act is the feel-good musical comedy smash based on the hit 1992 film that has audiences jumping to their feet! Filled with powerful gospel music, outrageous dancing and a truly moving story, Sister Act will leave audiences breathless.